Gosnell: The Movie--Trying to Tell the Story of an American Serial Killer Which Strikes Too Close to Home

In 2013, husband and wife veteran filmmakers Phelim McAleer and Anne McElhinney were publicizing their feature documentary Fracknation as the murder trial of Dr. Kermit Gosnell was occurring in Philadelphia.  McAleer was amazed at the lack of coverage of a prolific serial killer that murdered two women in botched late term abortions in unsanitary conditions, used a brutal snipping technique to kill a thousand children beyond the legal limit for abortion and also dealt prescription drugs.

Yet the national mainstream media ignored the Gosnell case, dismissing it like a local murder case while lavishing attention on the concurrent Jodi Arias murder trial. McAleer did man on the street interviews in California to learn about what the public knew about sensational murder trials.

As Katherine Graham, the former publisher of the Washington Post, proclaimed: "What we cover and what we don't matter a lot...The power is to set the agenda."  Fox News commentator Greg Gutfeld recently speculated about the reasons why most of the mainstream media (including Fox) did not cover the Gosnell trial closely: 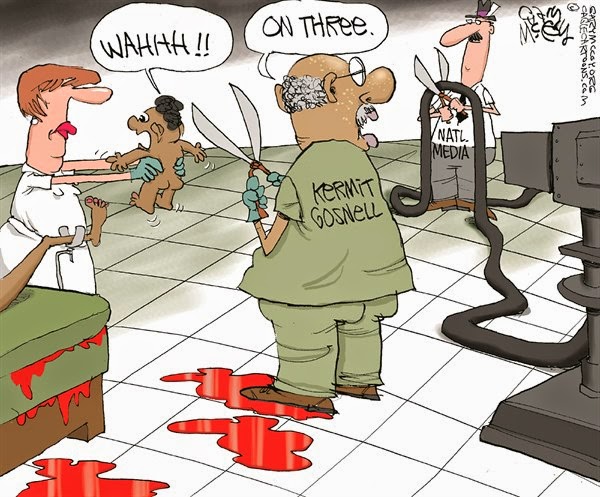 "The reason why they don't do this one is not because the evil is so grotesque.  It's that it's too close to a moral choice they've made.  That's what it's about.  It's not that like, ah it's so hard to do something on this man who butchered babies.  It's because it's too close to the pro-choice mindset."

However, McAleer and McElhinney were so haunted by the Gosnell trial that they backed away from other crowd-source funded projects so as to make a movie about Gosnell.  Yet Anne & Phelim Media encountered more velvet gloved censorship by Kickstarter, which claims to not curate projects but would not allow them to describe their dramatized movie idea as being about a mass murderer who killed a thousand children as it allegedly violated community standards which Kickstart "encourages and (selectively) enforces".  McAleer believes that it is within Kickstarter's right to not facilitate funding but that it should be forthright that it is due to the project matter not a transparent lie about community standards which it does not enforce for sundry other offensive projects.

So they moved their crowd-source funding efforts to Indiegogo, where they have raised $1.2 million  of a fixed target $2.1 million.  If they do not make their designated funding mark by May 12th, the money reverts  back to the prospective investors.

There is already an excellent documentary film 3801 Lancaster, which interviews victims of Gosnell's House of Horrors.  So McAleer and McElhinney want to make dramatized version of the Gosnell story which would run on the Lifetime  Movie Network rather than a feature documentary to reach a wider audience.

It is easy for seaboard elitists to dismiss a film about Gosnell as just being by religious zealots with pro-life propaganda, which is a touch charge to apply to McAleer and McElhinney. In addition, this dismissive instinct ignores how Dr. Gosnell was a racist as he gave his white patients much better and cleaner abortion services than his clients of color.

A film about Gosnell must also include a political angle.  Former Governor Tom Ridge (R-PA) was elected as chief executive of the Keystone State as a moderate Republican.  The governor's office made it clear that the Commonwealth should do nothing to impede abortion services, so Gosnell's clinic was not properly inspected for 17 years, despite gruesome reports and several deaths.

Gosnell's clinic was raided because Gosnell was writing prescriptions like a pell mell pill mill for Oxycotin and the ilk.  That raid permitted police to stumble upon an unsanitary abortion butchery, where Gosnell kept severed limbs as trophies.

Hearing the filmmakers promote their project, it is clear that they yearn to tell a compelling true story about a prolific American serial killer and pull back the curtain on details which a progressive public would rather ignore.

Posted by DC Calamity at 8:24 AM No comments:

President Trump on the Kavanaugh Circus

Posted by DC Calamity at 3:52 PM No comments:

Mitch McConnell on the Kavanuagh Confirmation

Posted by DC Calamity at 3:50 PM No comments:

Democrats with a Loco -Motive (sic)?

This loco label looms large in the mind of President Trump, as was echoed in his recent campaign rally in Johnson City, Tennessee.

Posted by DC Calamity at 2:19 PM No comments:

What a Blooming-thal Liar (sic)

During the extraordinary hearings for Brett Kavanaugh's Supreme Court nomination, Senator Richard Blumenthal (D-CN) harkened back to his days as a prosecutor as he mangled a Latin admonition given in jury instructions that: "False in one thing, false in all things".  But instead of impeaching Brett Kavanaugh, Da Nang Bloomenthal ironically impeached his own credibility.

When Richard Blumental was first running for the Senate, it was revealed that Bloomenthal had often boasted that he was a Vietnam War hero, when he had never been to Indochina during his military service.

If it was not invoked in such a sad situation, it would be funny. Somehow, it is unlikely that this just jibe will be satirized on Saturday Night Live.


Falsus in uno, falsus in omnibus indeed.
Posted by DC Calamity at 1:02 PM No comments:

Devin Nunes and the Collapse of the US Senate

A nadir of the Kavanaugh Circus was some Democrat Judiciary Committee members shifting their questioning of Trump Supreme Court nominee Brett Kavanaugh from uncorroborated allegations by Christine Blasey Ford to the 1983 Georgetown Prep's Yearbook.

Posted by DC Calamity at 8:19 PM No comments:

Posted by DC Calamity at 7:49 PM No comments:

Posted by DC Calamity at 7:17 PM No comments:

Brett Kavanaugh on the Confirmation Circus

Thomas Sowell on Emotions and Facts

Posted by DC Calamity at 8:49 AM No comments:

Fulton Sheen on the Zeitgeist

Posted by DC Calamity at 8:35 AM No comments: