“Democracy is two wolves and a lamb voting on what to have for lunch.  Liberty is a well armed lamb contesting the vote.”      (attributed to) Ben Franklin

While attributions to Franklin may not quite be on the money since the term lunch did not enter into common parlance until the 1820s, the meat of this food for thought is still quite fulfilling.   It aptly captures the tyranny of the majority and class warfare epitomized by the ineptocracy currently in power.  To borrow a phrase from the unmasked Occupy Movement "This is what democracy looks like".

The coda of this faux Franklin phrase alludes to the Second Amendment, which protects Americans from tyranny.  It is important to recognize why the Second and the Fourth Amendments were included in the Bill of Rights.  The British tried to enforce burdensome laws on their British American colonies without any input by the citizenry.  When Americans balked at things like the Stamp Act and the Tea Act (1773), the powers that be doubled down on their policies by sending in massive force and forcing the colonists to quarter the Red Coats. Taxation without Representation is more than a slogan that DC Statehood activists have ironically re-appropriated.   The right to keep and bear arms was not about helping hunting but as natural rights which  are backstops against anarchy and organized tyranny to protect property rights.
Posted by DC Calamity at 12:14 PM No comments:

DC as the District of Calamity--It's a State of Mind

These are the surreal musings of a  political animal living between the beltways.  My favorite contact sport may be politics but by interests are not poll driven. I think outside of the box and beyond the next spin cycle. And I will caucus with a variety of special interest groups.
Some consider the Nation’s Capital as “Fantasyland on the Potomac”. Other outsiders are “Fed Up” with the Federal City.  Personally, a better state of mind is thinking of D.C. as “the District of Calamity” (sic).
A tongue in cheek encapsulation of this political weltanschauung was made in the preface of P.J. O’Rourke’s book “Parliament of Whores: A Lone Humorist Attempts to Explain the Entire US Government”(1991)—God is a Republican and Santa Claus is a Democrat. 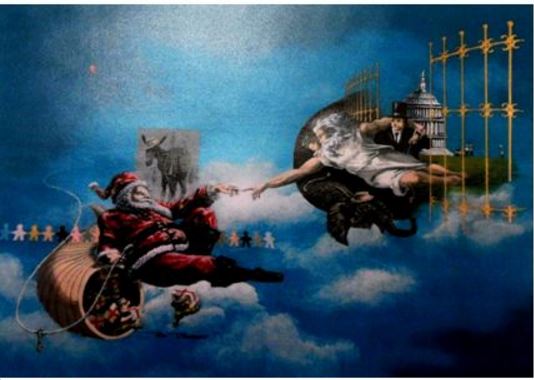 God is an elderly, or at any rate, a middle-aged male, a stern fellow, patriarchal rather than paternal and a great believer in rules and regulations.  He holds men strictly accountable for their actions. He has little apparent concern for the material well being of the dis-advantaged. He is politically connected, socially powerful and holds the mortgage on literally everything in the world.  God is difficult. God is unsentimental. It is very hard to get into God’s country club.

Santa Claus is another matter.  He’s cute. He’s non-threatening. He’s always cheerful. And he loves animals. He may know who’s been naughty and who’s been nice, but he never does anything about it. He gives everyone everything that they want without thought of a quid pro quo. He works hard for charities, and he’s famously generous for giving to the poor.


Santa Claus is preferable to God in every way but one: there is no such thing as Santa Claus.

Knowing the prevalence of Cocktail Party elected officials, I would qualify this quip by substituting the GOP with conservatives.
Posted by DC Calamity at 10:51 AM No comments: