Tolling the Bell to Honor the Wreck of the Edmund Fitzgerald 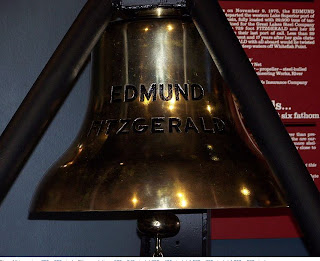 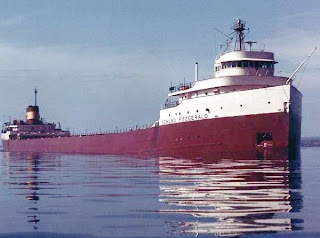 On November 10, 1975 the freight ship S.S. Edmund Fitzgerald sank during a storm on  Lake Superior. The wreck of the Edmund Fitzgerald was the worst loss on the Great Lakes, as the crew of all 29 sailors perished along with the $24 million freighter and a cache of 26 tons of taconite. The Edmund Fitzgerald carried its cargo of iron ore from mines in Duluth, Minnesota heading toward mills in the lower Great Lakes.  During the vessel’s final voyage, the “Mighty Fitz” confronted a mighty winter storm in Canadian waters with near hurricane force winds and waves of up to 35 feet high. The crew gallantly braved the gale force winds for a day and a half before succumbing to the stormy waters.  It is speculated that most of the crew were swept off the deck  by the massive waves before the full broke and the ship sank.

This maritime tragedy was immortalized in the song “The Wreck of the Edmund Fitzgerald”, which was written and composed by Canadian singer-songwriter Gordon Lightfoot in 1976.  In the midst of album oriented rock acts and brief advent of disco, this Dorian mode epic ballad nearly topped the American Billboard charts as well as conquering the Canadian charts.  The chart prominence may have been aided by Canadian Content requirements for music played on “the Big 8" CKLW-AM (Windsor, Ont.), which was a top rated station at the time in Detroit, Toledo as well as Cleveland. 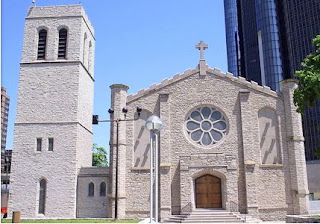 Lightfoot was inspired to write the ballad after reading an article about the sinking of the Big Fitz in Newsweek. The song was a straightforward recounting of the wreck of the Edmund Fitzgerald, but there was some artistic license.  Obviously, there was no way to know the crew’s final moments. There also some were slight inaccuracies, as the ship was actually bound for Zug Island (near Detroit) but eventually it was supposed to have docked in Cleveland for the winter. And Mariners’ Church (a.k.a. “The Maritime Sailors’ Cathedral”) was not a musty old hall in Detroit where they prayed. Lightfoot has strived to correct some of these details during recent live performances.

The Wreck of the Edmund Fitzgerald still resonates after 36 years as the laconic chronicle of the heroism of the lost sailors.  Few epic poems permeate the American consciousness like Lightfoot’s magnus opus. There are numerous cultural references to the tune.  A character in the film High Fidelity (2000) declared in the Top Five on songs on death.

The song has been covered many times.  A version that captures the haunting, surreal nature of sense of the surprise storm is by the Dandy Warhols from their Black album (2004). This may be inspired by the fact that the Daddy Warhol’s lead singer was related to one of the Big Fitz lost crew.

On the eve of Veterans Day, as we also celebrate the anniversary of the U.S. Marine Corps, it is worthy to toll the bell of honor 29 times for the valor of the lost crew of the Edmund Fitzgerald.

[This piece originally ran on DCBarroco.blogspot.com]

Posted by DC Calamity at 2:55 PM No comments: 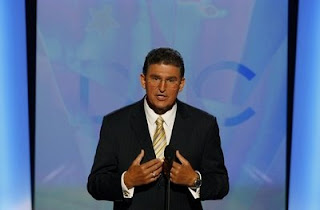 Even before he enters the Senate Club, Senator-elect Joe Manchin (D-WV) is being courted by Republican insiders to switch parties.  Manchin will be sworn in during the lame-duck session next week since it was a special election caused by the death of long-time Senator Robert Byrd (D-WV).

Aside from dangling choice Committee assignments (like Environmental and Natural Resources) to the new Senator for switching caucuses, the pot might be sweetened by funding pet projects.  There is talk that Republicans would back a plant that converts coal into bio-diesel fuel, which has been stalled in the 111th Congress.   This coal conversion scheme is a $1 billion pet project of the erstwhile Governor of West Virginia and would certainly show that he knows how to bring home the bacon.

Manchins aides are demur about party switching.  While Team Manchin claims, "He was elected as a Democrat and he has to go to Washington as a Democrat to try, in good faith, to make the changes in the party he campaigned on.”  But the same Manchin insider also said, "Now, if that doesn't work and Democrats aren't receptive, I don't know what possibilities that leaves open." That was such a great political answer that manages to converse out of both sides of his mouth.

These party favor forays seem to indicate that Republican leadership in the Senate does not appreciate the Tea Party premises.  Funding a billion dollar earmark for political favor in a backroom deal seems tone deaf to the good governance grievances of Tea Party types.   Moreover, this move would essentially be meaningless.

In the 112th Congress, the Democrat Caucus is 53 to 47.  The increase in Republican Senators will prevent the Obama Administration from steamrolling liberal legislation and picking off a couple of RINO defectors to overcome cloture votes. Certainly the thinking is that Manchin could be the vanguard to stampede conservative Democrat Senator Ben Nelson (D-NE) and liberal hawk Joe Lieberman (I-CN) to caucus with the Republicans.  But It would take four defections in the Senate to shift party control, which is highly unlikely.

Manchin was elected on a conservative campaign although he was elected as a Democrat.  He is going to have to face that constituency in two years.   If Senator Ben Nelson wants to be re-elected, he will have to vote more conservatively and not be swayed by things like the Cornhusker kickback on Health Care. Both Manchin and Ben Nelson would be unlikely to stray far from the conservative fold even if they do not strictly caucus with the Republicans.  In the 2012 cycle, Democrats will have to defend 22 seats, some of which were marginal wins in 2006.  Combine that with the changing electoral map due to redistricting, Democrats will have their hands full trying to keep control of the Senate.

It seems like former Senator Trent Lott’s statement about co-opting new members still has some resonance amongst the Cocktail Party and (by some extension ) Senate cloakrooms where there is the expectation that it can be politics as usual.  The Midterm Elections should have shown that the voters prefer a different cup of tea for party functions.

UPDATE 11/10  Considering the day after this rumor broke, the RNSC started a campaign directed AGAINST Senator-elect Manchin, it makes more sense that the party switching rumblings may have stemmed from Manchin's staff to seem to augment his position by playing coy.
Posted by DC Calamity at 11:40 AM No comments: