Trepidations About a Troll Party Takeover 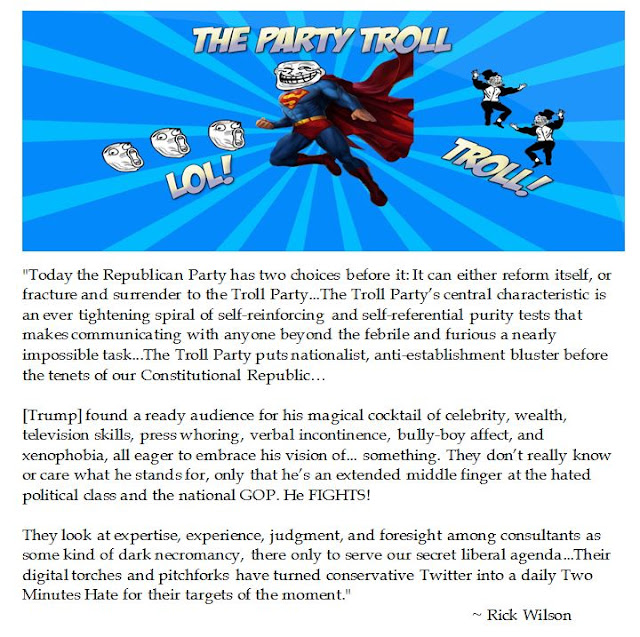 It is interesting to attempt to understand Trump’s fanatical support.  I assumed that it mainly consisted of disgruntled Tea Party types who are disgruntled with the “Surrender Caucus” which currently rules Between-the-Beltways.  After the Second GOP Debate, however, social media Trump-etteers give a different impressions– unprincipled, uninformed, obnoxious and ultimately alienating.  In other words, tending to be troll-like.

One abrasiive interlocutor touted former one term Congressman Col.  Allen West (R-FL 22nd)  as being the right choice for Trump’s VP, She dismissed the possibility of having the former Florida Congressman as a replacement Speaker of the House if Boehner loses the Vacate the Chair vote for an unusual reason.  Not the unlikely novelty of electing a Speaker who no longer is a member of the House. But this Trump true believer tweeted: “The Speaker is just a vote counter spot and [Allen West is] more valuable than that.”  Hmm.  That was a novel, if not naive, understanding of American government.

So I chimed in noting that the Majority Whip is the House Republican vote-counter whereas the Speaker sets the agenda, acts as the face of the House and is third in line for the Presidency.  The social media shrew sarcastically claimed that she didn’t need to be schooled. Really? Yet I did not want to inherently alienate an anti-establishment Republican, I replied: “If you knew then you would not have asserted that House Speaker is just a vote counter. Sorry” Even this attempt at an olive branch gave umbrage yet this troll still wanted to blurt out more bile and incorrect assumptions on how the lower chamber works. My viewpoint was denigrated because I was too DC.  It seems that a handle like CalamityDC is too subtle of a  protest to business as usual in the District of Calamity (sic) for that Trump-eteer. 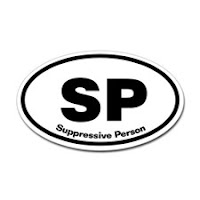 Her cyber comrades in arms claimed to block me because “You can’t fix stupid.”  What a way to win friends and influence people! My heart certainly does not break for being blocked by a Trump-eteer troll. But I have to wonder what is the objective of these online activists?  I was not even questioning the merits of their desired nominee. I interjected with obective process information, yet Trump-eteers took it as an attack and made me the campaign equivalent of Scientology’s Suppressive Person (SP).  Guess that coalitions or even winning more Republicans is unnecessary to their bewitched beliefs. 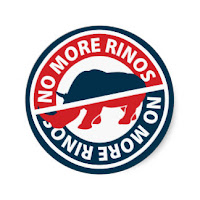 Another close encounter of the social media kind was with a guy whose handle is “No More RINO Excuses”, but he was juxtaposing Donald Trump to Senator Rand Paul (R-KY).  This struck me as strange that a libertarian Republican like Dr. Paul was labeled a Republican in name only. Fleshing out the dispute, the Trump-eteer disliked Dr. Paul’s disengagement from foreign military entanglements.  But the poster asserted that Mr. Trump would have a robust military.  I asked to be educated how this would be done, as Mr. Trump has only pronounced platitudes in his two debate performances and his so called major Foreign Policy speech (which only lasted for ten minutes) aboard the U.S..S. Iowa.

The Trump-eteer inquired if I watched the debate. Of course I had but I noted that it should be easy for him to tick off the specifics. Naturally, the Donald had not done so other than cite the slogans “Winning”, “Make America Great Again” and “I build the best military that I won’t even have to use it.”  When pressed for specifics, the Trump defender claimed that no candidate offers specifics at this time.  I observed that Carly Fiorina was quite specific about battalions and troops at the Reagan Library debate.  And I’ve even heard Dr. Ben Carson talk about replacing the Ohio class submarines.  What made me prick up my ears was how the flustered Trump-eteer suggested that I ask “The Donald” myself as I would be happier with his answers. Sure. This is a social media activist posting numerous pieces to support his candidate and thinks that a skeptical questioner is going to get the equivalent of “face time” with the candidate.

I saw another active social media commentator who sent hundreds of anti-Fiorina messages, accusing her of proliferating nuclear materials to the Persian Gulf.  When others asked what was his sourcing, the standard answer was a stonewall:  “Do your own homework”.  OK. Pugnatious, smearing and ambiguous.  Masochistically, I read a day’s worth of his reposts and messages to confirm who was his candidate.  Unsurprisingly, the diatribes started soon after the Reagan Library debate, pointing to an internet poll which purported that Trump beat Fiorina big league, so to speak. Similar internet polls claimed that in 2008 and 2012 that ex Congressman Ron Paul (R-TX 22nd) won huge victories after his debates.

Perhaps these are three isolated examples, but these  experience underscores Rich Wilson’s warning about not allowing the Republicans to be co-opted by Trump’s Troll. Like their leader, Trump-eteers love to point to the polls which have the billionaire with a Huuuge lead.  They don’t appreciate being challenged on the cross tabs.  Aside from discerning if it is a national poll (which means nothing more than name recognition) or a state poll.  Then there is sample size, party affiliation, percentage of undecided voters,  being registered or a likely voter etc... As silly season (the summer before Presidential primary season) ends, celebrity status driving name recognition wanes and voters get serious about their support for candidates to the Oval Office.

These exchanges relish the fight and refuse to give in, despite not having the fact on their side. That seems jesuitical. These internet exchanges do not seem based on constitutional principles. Nay, one gets the impression that details do not matter or ignorance on the interworkings of our Constitutional Republic. These cyber shock troops will brook no dissent nor take no prisoners. Such agitated activists would probably support having Charlie Sheen as Trump's as Vice President because of "Winning".  This is not out of the realm of possibility as the star of Anger Management is willing to be Trump's VP.

During an interview by Glenn Beck, social media expert John Cardillo analyzed the fervent support of Trump-eteers.  Cardillo opined that they were not Tea Party supporters but were part of 4-7% of Republican supporters with an identity crisis.  They are tired of losing and turn their anger towards the Republic Establishment without having defined goals or base principles.

It is easy to liken this to rivid men of action during times of trouble in Western Europe in the aftermath of The Great War.  A charismatic leader who confidently promises to make the trains run on time can utilize such unquestioning foot soldiers as well as dispense of them when it becomes too inconvenient. Beck tends to think that the world is going into a very rough patch and that the polity has been framed in a top down/bottom up/inside out paradigm which creates chaos.  That is when the masses cry out for a strong man to make all the tumult go away, and perhaps making our Constitutional Republic go away in the process. 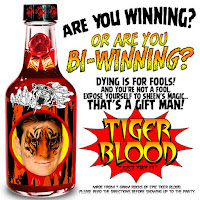 While politics is a favorite contact sport in the District of Calamity (sic), it must be admitted that poltics is not a beanbag sport. Prolonged primary campaigns involve endurance, strategy, building support, formulating and articulating proposed policy, persuading voters and getting out the vote. It can get rough and tumble in the primary trenches but in the end, it is hoped that the party can come out unified and offer an appealing vision which wins over Independents and undecided voters and becomes victorious. But the vacuity and vituperativeness which seems to characterize Troll Party elements calls those political precepts into question. In that case, is “Winning” just an empty boast like drinking tiger’s blood?

The current Republican field has a baker’s dozen of serious candidates that have anti-establishment animus would appeal to Tea Party Sympathies (Carson, Cruz, Walker, Paul, Jindal).  Thus the Tea Party vote is currently fragmented.  Winnowing of the primary field field may allow a coalescing around a couple of strong candidates who espouse Tea Party values. But  if the Troll Party overwhelms the Grand Old Party, it may be impossible to bridge the political chasms which divide Ameicans as the path will be blocked by untamed trolls. That may well be a bridge too far for principled constitutional conservatives.

Posted by DC Calamity at 5:58 PM No comments: