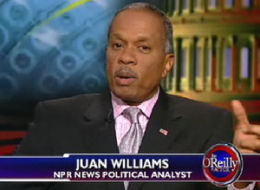 Long time NPR news personality Juan Williams was terminated by National Public Radio (NPR) after offering his opinions on FNC’s O’Reilly Factor.   Williams was asked by the host for his views regarding the walkout reaction to the Goldberg/Behar gaggle on ABC’s The View when O’Reilly said that Moslems committed the atrocities on 9/11/2001.

I mean, look, Bill, I’m not a bigot. You know the kind of books I’ve written about the civil rights movement in this country. But when I get on the plane, I got to tell you, if I see people who are in Muslim garb and I think, you know, they are identifying themselves first and foremost as Muslims, I get worried. I get nervous.


It did not matter that Williams couched his views by added that there are plenty of good Moslems but that those who were strongly identifying with Moslem culture are more prone to jihadism.

NPR’s press release noted that Williams remarks, “were inconsistent with our editorial standards and practices, and undermined his credibility as a news analyst with NPR.”.   That high minded statement of standards seems rather hypocritical considering NPR approving the Mark Fiore’s  “How to speak Tea Bag” on their own website.   NPR omnibusman Alicia Shepard claims that no one knew that “tea-bagger” was a sexual slur.   NPR executives would neither apologize for the cartoon nor remove it from their website. NPR Vice President for News Ellen Weiss said, This one satire is not the only coverage on the topic and while it offends some members of the audience, I see no reason to remove it."

If Williams’ introspective opinions on ANOTHER NETWORK  was controversial and over the line, Michelle Malkin points out that an NPR affilliate employee Sarah Spitz of KCRW wished death on Rush Limbaugh, and this was not considered a firing offense or even a distancing of the repugnant view by the network.

Could William’s termination be due to the $1.8  million endowment by George Soros Open Society Foundation to endow hiring 100 political reporters for NPR?  Aside from its left of center slant, NPR has been well known for skewing news for reporters with endowed news beats.  For instance, NPR used to only have one Pentagon reporter but had five science reporters that were endowed by generous grants by public minded corporations.  Of course, this underwriting would never have any influence on NPR science coverage since Public Radio is so fair and balanced and unbeholden to corporations–not.

A more likely causal connection is Politically Correct dhimmitude.  On Wednesday, the Council for American Islamic Relations (CAIR) issued a press release demanding consequence for William’s opinion. CAIR National Executive Director Nihad Awad stated: "Such irresponsible and inflammatory comments would not be tolerated if they targeted any other racial, ethnic or religious minority, and they should not pass without action by NPR.".  Williams was notified of his termination Wednesday night.

Williams was off the PC reservation and expressing these concerns was anathematic to elites.  So much so, NPR CEO Vivian Shiller was quoted as saying to the Atlanta Press Club that Juan Williams should should have kept his feelings about Muslims between, "himself and his psychiatrist or his publicist," But Shiller walked that statement back after bad publicity and said that she spoke in haste.

Juan Williams has never been the darling of conservatives as he was a reliable liberal.  However, Williams has a remarkable record for his honesty and integrity about racial issues.  Williams sometimes stood alone and reused to  succumb to the drum beat of conformism to so called civil rights leaders.  If people can not connect the dots and see how individuals who aggressively immerse themselves in Islamic culture are going to be more prone to the siren song of violent jihadism then this country is well on its way to dhimmi-tude.
Posted by DC Calamity at 5:51 PM No comments:

Since President Obama has taken office, the Republicans and the Democrats have been challenged by a few new “parties” to the political scene. While these factions have not yet sought to create formal party apparatuses, they are seeing to influence the established political parties.

Clearly, the TEA Party has stirred the grassroots of the American political field. While there may be other embryotic origins for the Tea Party, many attribute an on the air rant by Rick Santelli of CNBC as being the inspiration for the movement. In February 2009, while he was filing a live report on the floor of the Chicago Mercantile Exchange about the Homeowners Affordability and Stability Plan, Santelli vents about the poor financial plans that the Federal government was implementing. The CNBC reporter turns to the traders and asked if they should be forced to subsidize the bad behavior of others’ home loan, which elicited a bevy of boos. Santelli spontaneously suggests throwing a Chicago Tea Party.

The Tea Party is a reference to the iconic Boston Tea Party of 1773 when the Crown tried to impose the Tea Act. American colonists protested this tax for many reasons but especially because it violated the perceived principle that Americans had the right to be taxed by its own elected representatives. The Sons of Liberty took matters into their own hands by boarding the ships dressed as aboriginal Americans and throwing the merchandise into Boston Harbor. This was considered to be a key event in advancing the nascent American Revolution.

Within two weeks of Santelli’s clarion call on CNBC, there were protests in 40 cities around the country in reaction to Porkulus, a.k.a. the $787 Billion Stimulus Package that was rushed through Congress. The contemporary TEA party picked up steam by widespread nation wide protests on April 15th 2009, tax filing day. The terrific turnout at these ad hoc grassroots events showed participants that they were not alone and that they were Taxed Enough Already. Points of commonality included: lowering taxes, stopping wasteful government spending, reducing that national debt and adhering to the Constitution.

During the August Congressional Recess, when elected Federal officeholders often tour their districts on listening tours and hold Townhall Meetings, they were greeted by motivated Tea Party activists, who asked hard questions. Some of these Townhall Meetings were quite contentious. So much so, some lawmakers cancelled their public appearances since these Town Halls were not the typical constituent cake walks.
There was a gathering on the National Mall on September 12, 2009 that was promoted by Glenn Beck, FreedomWorks and many Tea Party organizations that attracted legions of Tea Party Activists. Crowd estimates vary, but the figures range from 80,000 from the Lamestream Media to an unofficial 1.2 million by on the scene Park Service officials. A figure that seemed reliable counted the number of marchers at Constitution and 14th St. NW, which came to 600,000, but did not include people like me who joined along the way. Regardless of the exact numbers, the crowd was massive.

The Coffee Party was (not was) an effort to counteract the success of the Tea Party that was launched on Facebook in January 2010. I apocryphally associate the genesis of the Coffee Party to the liberal young hipsters that hang out at Starbucks and the ilk. Their slogan was “Wake Up and Stand Up” with a mission to getting cooperation in government and removing corporate influence from politics. The Coffee Party was announced with great fanfare on the Lamestream Media, but the public seems to have received it with the lukewarm enthusiasm of Instant Joe. After the initial news peg there has been virtually nothing in the way of activism or media news pegs. In late September 2010, the national Coffee Party convention in Louisville drew only 350 participants and virtually no media coverage. Considering the watered down rap that organized tried to enlist their elderly audiences involvement, I would say that the Coffee Party is decaffeinated swill that can not be given away.

The Cocktail Party is not a new phenomenon but is an apt appraisal by former Governor Sarah Palin (R-AK) of between the beltways elitists. Angelo Codevilla wrote a book entitled “The Ruling Class: How They Corrupted America and What We Can Do About It” which details the group of bipartisan political elites who run America. It is not just many elected officials but the power circle includes Ivy League academics, those in think tanks and East Coast media mavens. Codevilla illustrates through the example of Supreme Court Justice Clarence Thomas, that just because you hold a prominent position, you are not automatically accepted into this elite cliche as you did not go to the right schools and were not trained to think the proper way. You can get this elitist imprimatur even if you have occasionally have wandered off the ideological reservation if you hold a powerful position and mouth the right shibboleth.

The Ruling Class and Country Class (the rest of us, especially in “Flyover Country”) has some resonance but can be confused with the economic class dichotomy of former Senator John Edwards (D-NC). So I believe that a more suitable moniker is the Cocktail Party. When President Ronald Reagan came to Washington, he was adamant about not governing to please the Georgetown cocktail circuit. Palin echoed those sentiments during a speech Bakersfield, California where she railed against cocktail party types, the go-along-to-get-along establishment Republicans. Pardon my French but Palin’s political bon-mot is le mot juste. With one clever phrase, Palin captured the establishment aspirations and inclinations of the Cocktail Party.

As the primary season has shown, the Cocktail Party wing of the Republican establishment is threatened by the Country Class sensibilities of the Tea Party movement. In the general election, I expect the Tea Party spirit to sweep out many entrenched incumbents. That will certainly change the Georgetown Cocktail circuit.

Personally, I agree with many of the espoused principles of the Tea Party. But since it is a loose amalgam of grassroots groups, some Tea Party organizations and candidates are not the most appealing or savvy. The test will be governance after November 2nd. In a moment of candor, former Republican Senate Majority Leader Trent Lott (R-MS) warned that a bloc of rabble-rousers spells further Senate dysfunction. I trust that Tea Party candidates will not easily sell out to the Between the Beltways values of incumbency. The real question is whether they will be perched on principle and accomplish nothing or if they can find ways to bend enough to effectively legislate their policies.
Posted by DC Calamity at 10:56 AM No comments: