On the Christian calendar, January 6th was the Epiphany, a day of illumination.  In the Constitutional process, it was the day when Congress would consider and ratify the results of the Electoral College.   As President Donald Trump was convinced that election irregularities had stolen his victory from November 3rd, he called for a big Save America rally on the Ellipse to #StopTheSteal.

Instead of being remembered as a time when defenders of the rule of law in Congress put forth a case that some of the state’s election results were invalid, most people will remember a Siege of the Capitol, in which Congress left in haste, troublemakers overtook part of the building and one woman was shot and killed.  Conventional wisdom will link the rioting with the Deplorables’ March on Washington, and establishment opinion makers will use it as a means to discredit the populist political movement, or even to remove President Trump by a late day impeachment or the 25th Amendment.

In the fog of war, there is a lot of confusion.  So when trying to make sense of the Capitol Siege, there are some things that do not add up.   A basic question is how could agitators so easily breach the Capitol building?  After all, the date was when all federal lawmakers and the Vice President would be gathering at the Capitol for what is usually a pro forma ceremony. It was clear that some objections would be raised and there would be debate over certification. Surely, security plans would afford added protection for the lawmakers.   In addition, Mayor Muriel Bowser (D-Washington, DC) had requested (and received) help from the National Guard while warning residents to stay home.  With that in mind, how did the Capitol so easily find itself in peril?

Deployment of forces certainly was part of the problem.  The National Guard called up was initially tasked with directing traffic around many of the blocked off streets around Capitol Hill and downtown DC.  National Guard typically does not get front line security deployments because of posse commitatus concerns and letting local law enforcement take the lead. In retrospect, it seems silly to have troops play traffic cops when there were a half million protesters going to march up the National Mall to the Capitol to protest “Stop the Steal”.

One also has to wonder about the Capitol Hill police.  Video from when protestors breached the West lawn perimeter does not depict officers with full riot equipment as they clashed with troublemakers wearing helmets and carrying shields  who later broke into the Capitol.  But there are videos videos both on the West exterior stairs  and the West entrance  which give the impression that agitators were let into the complex by Capitol Police. This seemed strange.

Then one must consider the timing of the Capitol Siege.  President Trump was still speaking on the Ellipse at 1 PM when the Joint Session of Congress met for Electoral College Certification.  Shortly after certification began (ironically when the Arizona objections were raised), was when serious challenges of the Capitol building entrances began.  The Ellipse is at least a mile and a half away from the Capitol. It seems like troublemakers were pre-positioned on Capitol Hill to riot.  Adding to that conclusion is that the House Cannon Office Building and Library of Congress Madison buildings had been evacuated earlier in the day for security concerns.  Moreover, law enforcement found potential pipe bombs near the RNC which had to be detonated.  Kind of odd for conservatives and populists who needed Republican support to air their objections to physically threat the Republican National Committee.

To make sense of the Capitol Siege, it is incumbent to examine who perpetrated the breach.  A facile answer is MAGA types.   While there is no doubt that a multitude of passionate protestors came to Capitol Hill to exercise their First Amendment rights, most milled around the Capitol steps and did not go inside.  But that's hardly the whole story.

Many who were photographed trespassing in legislative chambers or the Rotunda did not fit the bill as quintessential MAGA rally attendees. Giving the BLM salute while sitting in the Senate President pro tem’s seat is incongruous with Trump supporters.  Jake Angeli (aka QAnon Shaman), an agitator dressed like a Viking had been seen at BLM and Climate Change rallies, again not run of the mill MAGA issues.

There was an agitator which investigative journalist Ian Miles Cheong identified as an actual white supremecist.

A rioter who assumed the seat of the President pro tempe of the Senate made the quintessential BLM power gesture. 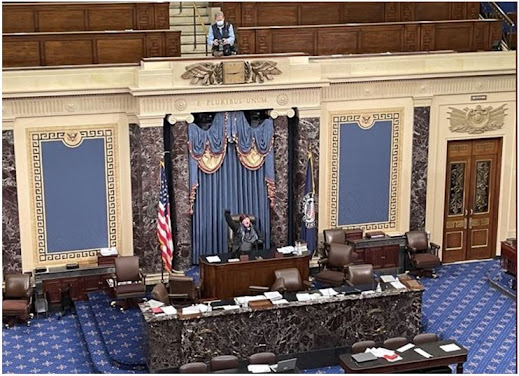 Pro Trump protestors stopped Antifa agitators when caught ransacking the Capitol.  At prior DC MAGA rallies in November  and December, Antifa had counter-protests and assaulted peaceful MAGA protesters on the streets.  Where were such agitators on January 6th?  Nonetheless, it seems that fringe elements and agitators were the instigating the violence. 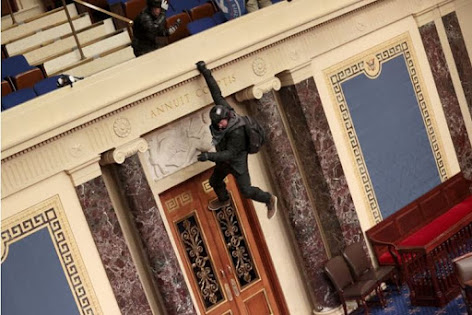 This is not to imply that some Trump supporters did not participate in the unlawful Capitol Siege.  Leo Kelly, a Capitol Siege participant interviewed by LifeSiteNews  gave an interview saying that he participated in a communal prayer while trespassing in the Senate Chamber.  A West Virginia State lawmaker recorded his storming the Capitol and  was heard directing people in the Rotunda not to do any damage. Ashli Babbet, the woman who was shot and killed by a Capitol Police officer, was a 14 year Air Force veteran who had flown into Washington for the rally. Capitol Police report that three other people died at the Capitol. But some of those casualties may well have stemmed from ordinary health maladies.

It is a reasonable presumption that a relatively small group of Antifa types created chaos on Capitol Hill, breached the Capitol and egged the many disgruntled MAGA demonstrators to participate.  With the prior soft barricades being removed, many from the Ellipse surrounded the Capitol, probably with the attitude that “it’s the peoples’ house”.

In trying to make sense of the fallout from the Capitol Siege, it was easy to see how this violence overshadowed any objections to certifying some of the Presidential Electors due to election irregularities.  It was clear that the 117th Congress was unlikely to accept any objections, considering the slim Democrat majority in the House and Republican Senate leadership coming out against them.  Moreover, Vice President Pence issued a statement claiming that he had no power in the matter other than acting as a ceremonial manner, quashing hopes that some certifications would be sent back to the states. However, the objections to certification would have given a public forum to show the facts in a formal setting, so they would not be dismissed as conspiracy theory.  Alas, debate on the first set of objections in Arizona was interrupted by the Capitol breach.

When Congress reconvened that evening, some lawmakers who previously considering joining the objectors switched sides, and in general consensus Congress rushed through the certification. Those who wondered about the propriety of certifying states with voting and election irregularities will be left unsatisfied and will likely conclude that President-elect Biden holds office under questionable legitimacy.  Seeing how quickly Republican establishment lawmakers folded under pressure gives the impression of being quislings.  Those groups who make trade of violent street protests as a vehicle for change will feel empowered.  The establishment in the media and on Capitol Hill may well use this as the pivot point to discredit populism and re–establish Deep State authority.

President-elect Biden gave a speech imploring President Trump to condemn the violence and demand an end to the siege. At the same time, President Trump was recording a message for social media urging people to go home and be peaceful.  But tech oligarchs on Twitter and Facebook interfered with distributing President Trump's message and later suspended Mr. Trump until he withdrew that message because it might incite violence and questioned the election results. Now our cyber betters have indefinitely banned the 45th President from Facebook

It is also odd that more National Guard troops were called up and their mission was changed by Vice President Pence and the Acting Secretary of Defense in conjunction with Congressional leaders. Isn't the President Commander-in-Chief?  If one takes the rumors that Cabinet officials were talking (but not with Vice President Pence) about invoking the 25th Amendment to remove Mr. Trump, doesn't this lend credence to something resembling a coup?

In the aftermath of the Capitol Siege, many details are distorted or undiscovered so there is not a true Epiphany.  One ought to give some consideration that these events may have been an attempt to actuate a Color Revolution and progressive forces use the chaos to make a play and power and cement their dominance over the body politick.   As noted before, Antifa was not present in their typical garb, but their tactics and some mannerism seemed evident amongst some rioters.  On January 5th, there were caches of bricks, lumber and propane tanks stowed on the street near Freedom Plaza, close to MAGA protest sites.  Those supplies have the hallmarks of Antifa or BLM rioting tools. But with the Capitol Hill Siege being successful, they were not deployed.

Time will tell if such kinetic tactics will continue in the 46th President’s Administration or will markedly expand to other fringe groups. Moreover, it is unknown if the civic response to this anarchistic agitation create crackdowns on civil liberties or against voices which challenge the Establishment "mainstream".

There have been indications that there were Antifa Agent Provocateurs who planned to create chaos and egged passionate Pro-Trump protestors to storm the Capitol.

In an extended interview with the Epoch Times, war correspondent Michael Yon noted how organized Hong Kong tactics were evident outside of the Capitol during the siege. In addition, Yon observed how peaceful Pro-Trump demonstrators tried to stop these agents provocateurs and sought to separate themselves from their anarchy.