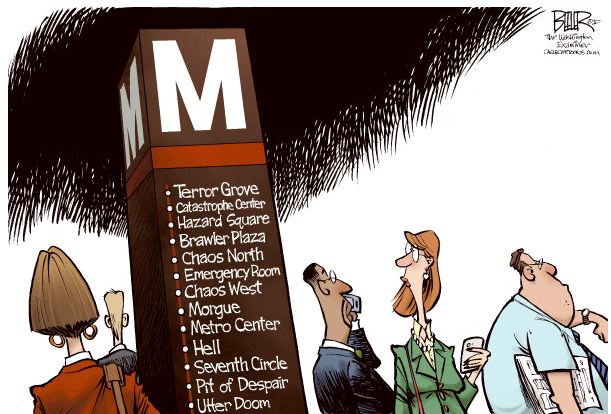 P.J. O’Rourke once observed “Giving money and power to the government is like giving whiskey and car keys to teen-aged boys”.  This demonstrated with the  latest proposal of fare increases for the Washington Area Transportation Authority.  The DC Metro Board has proposed another 5% fare increase to help alleviate budget shortfalls for the system.  This comes on top of the $109 million fare increases from July 2010 that included the dreaded 20 cent surcharge for peak-of-the-peak.

The Metro overloads believe that they will curry favor by lifting the peak of the peak fares, which they deemed a failure.  Instead, the gimmick would be to charge flat rates for Farecards--$6 for rush hour and $4 for other usage.  Alas, the changes would only bring in $66 million in new revenue so local governments would also need to increase their contributions by $53 million.  Hence the taxpayers get stuck once.

But the dirty secret which the Metro Board does not highlight in their proposal is Farecards tend to be a perk of working for the Federal government. So jacking up the rush hour Farecard toll to $6 throws the excess costs on Federal Agencies, which will inevitably be passed along to the nation's taxpayers.  Thanks Uncle Sugar, that means that taxpayers get stung a second time.

These fare increases frankly seem pretty steep, but they might not stink as much if the service was not so sketchy.  In June 2009, there was a fatal Fort Totten rear end train crash which killed eight passengers and one transit worker which was due to 'anemic safety culture'.   The blog "UnsuckDCMetro" chronicles the safety deficiencies in hardware as well as manpower.  Elevators are prone to be out of service.  Trains can be stuck for prolonged periods, occasionally requiring evacuations.

Despite the service shortcomings, the DC Metro has embarked on an $11 billion 23 mile expansion to Dulles International Airport.  Costs to local taxpayers were slated to escalating because the Washington Metro Airport Authority unilaterally decided that the metro station at Dulles should be buried so as not to interfere with the aesthetic of the Eero-Saarinen, which only adds another $330 million and an extra year to the expansion project. Fortunately, the WMAA flip flopped eschewing the burden on local taxpayers.  But this shows the dangers of bureaucrats behaving badly and  unaccountable public entities making uneconomic decisions with the burdens falling on taxpayers.

Raising fares without offering perceived benefits is financially dangerous.  The new Fyra High Speed Rail Service in the Netherlands between Amsterdam-Rotterdam and Breta cost Dutch taxpayers nearly $11 billion.  The Fyra does not offer marketedly better service and costs 20% more so consequentially those trains run 85% empty and run at about a half million dollar a day loss.

Urban planners and green enthusiasts have long touted the virtues of having railroads and subways to ease congestion and lessen the "environmental footprint".  Few of these modes of transport are profitable.  The reality is that most rail systems will be publicly operated boondoggles which enrich municipal union workers at the expense and convenience of the public.


[This piece originally ran at DCBarroco.US]
Posted by DC Calamity at 7:03 PM No comments: