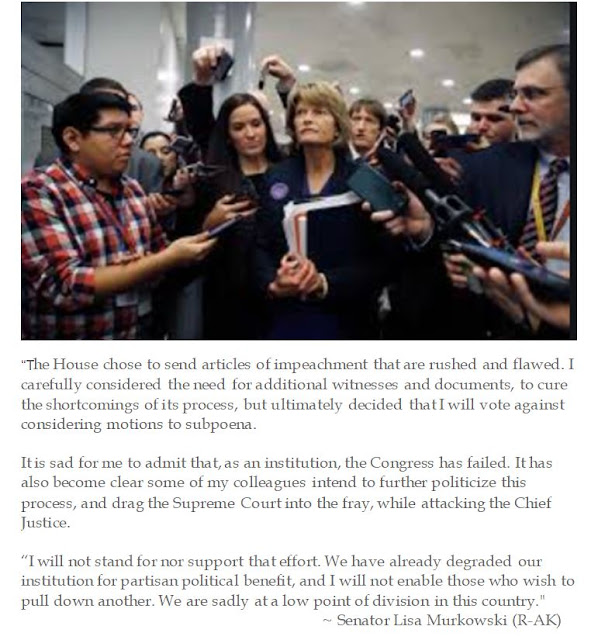 During the Impeachment Trial, House Managers have vociferously argued for the need of more witnesses to try to convict President Trump.  Democrats had hoped to gain the support of four maverick liberal Republican Senators to take control of the Impeachment process to continue to search for the silver bullet that would compel removal of the President. 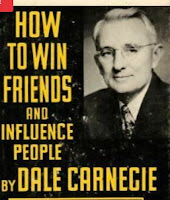 With that dynamic in mind, it is curious how Democrats have conducted themselves during the Impeachment Trial.  On the opening day, when deliberations went past 2 a.m., House Managers asserted that their rushed Impeachment put the Senate on trial along with the President.  Perhaps they should have consulted Dale Carnagie on "How to Win Friends and Influence People".

As House Managers closed their arguments, Representative Adam Schiff (D-CA 28th) implied that President Trump told wavering Republicans that if they voted incorrectly then their heads would be put on pikes.  That charge was so outrageous that Senator Susan Collins (R-ME), who was one of the supposed persuadable Republicans, exclaimed: "That's not true."

During the Question Time, Senator Elizabeth Warren (D-MA), who is currently running for President, submits a query which drew Chief Justice of the United States John Roberts into the political fray, wondering if this contributes to the public's lack of confidence in the system.

Aside from Chief Justice Roberts death stare, one wonders what the Democrats were thinking?

Maybe Warren gets her name in the news for a "tough question" before the crucial Iowa Caucuses.  However, this veiled attack further politicizes the process.  And it was aimed at Chief Justice Roberts, who had twice helped Democrats out by not allowing Senator Rand Paul's (R-KY) incisive question about the so called "Whistle Blower".

Further fallout from attacking Senator Lisa Murkowski's vote on witnesses.  The question was going to be a close vote.  But Murkowski was so offended by this tactic of sullying the Chief Justice that they lost her support, dooming the call for witnesses.

While conservative commentators are wont to think that Democrats had weak Articles Impeachment which were rushed through the House, the way Democrats comported themselves during the trial, they seemed like they just wanted political wedge issues rather than trying to remove the Chief Executive.
Posted by DC Calamity at 6:06 PM No comments: 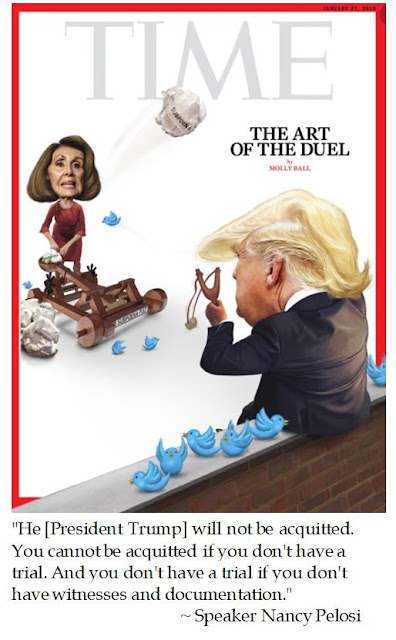 Needless to say, Speaker Pelosi's assessment has not been universally accepted, much less respected.

Posted by DC Calamity at 1:19 PM No comments:

"President Bolton" Gets a Nasty Gram Via Social Media 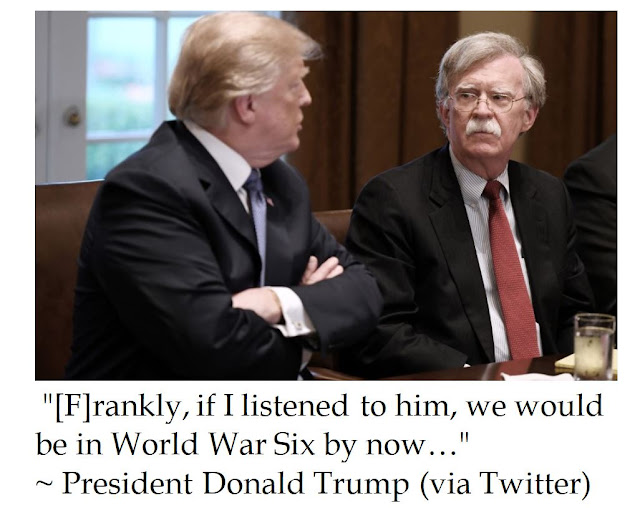 Former Trump National Security Advisor John Bolton has been the focus of question day at the Impeachment Trial. Democrats have claimed that Bolton must testify, but they never bothered to subpoena his testimony before the House voted to impeach the 45th President.

After the first day of the Trump Defense team presenting their case before the Senate, there was a convenient 11th hour leak from Bolton's political kiss and tell memoirs, which were being vetted by the NSC ethic office for classified clearance.  The leak of the salient snippets from Bolton coincidentally broke on the first day of pre-sales for Bolton's book, which is due to be released in March.

John Bolton had earned a sobriquet of "President Bolton" due to his penchant for autonomy, did nothing to quell the controversy, particularly since it shed favorable light from an establishment who often railed against him.  Moreover, the calls for him to testify probably boosted book sales.

President Trump, who is renowned for punching back and using social media to express his animus, seems to have gotten fed up with his former advisor and sent him a nasty gram via Twitter.

Posted by DC Calamity at 8:30 PM No comments:

On the Boons and Banes of Choreographed News

Some political junkies who sought answers during the Impeachment Trial question time got frustrated on social media because the first day of question time seemed so choreographed, particularly by Democrats.  Impeachment Manager Jerry Nadler (D-NY 10th) clearly was reading note cards when answering the supposedly spontaneous questions.  There were many instances in which Impeachment Managers had graphic readily available to buttress their arguments.

This situation is a reminder to savvy civic observers that many political events are choreographed.

Astute impeachment observers have noted how the lessons of the Justice Kavanaugh confirmation appear to be echoed by those seeking to remove President Donald Trump from office.  For a controversial hearing, anonymous allegations are made during the process, there is a call for additional witnesses without much vetting and organized protests on Capitol Hill.  Coverage by the mainstream media is skewed that one party is hiding something and won't allow the truth to come out.

One presumes this is intended to create a groundswell to quash the target.  People who don't prioritize following the news can be led down a primrose path to progressive conclusions.

This might lead one to believe that choreographed news is always objectionable.  Populist supporters of President Trump might deride it as "Fake News". However, there are instances when it can be quite satisfying and iconic. 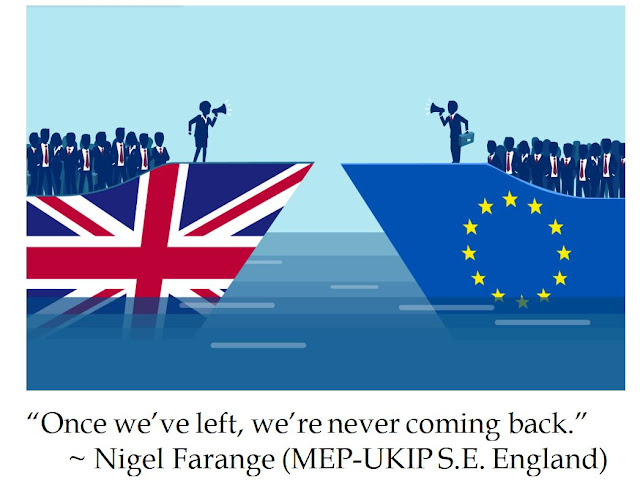 
As part of his schtick, Farange led the British contingent to wave the Union Jack flag and walk out of the chamber in Brussels.   This not so fond farewell was certainly pre-planned and coordinated.  Farange's views were not novel, but his choreographed send off was iconic.

Posted by DC Calamity at 6:14 PM No comments: 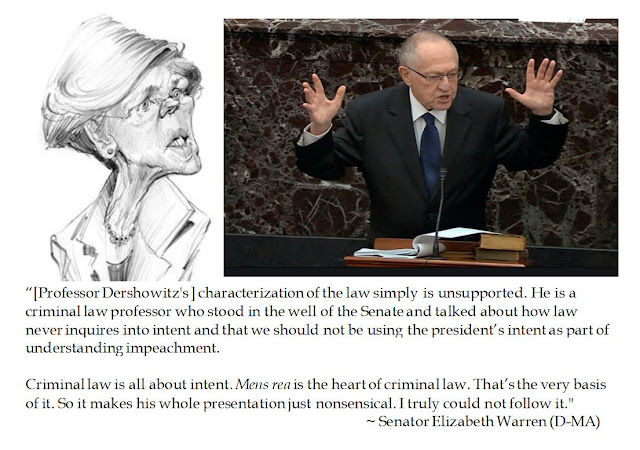 Posted by DC Calamity at 2:50 PM No comments: 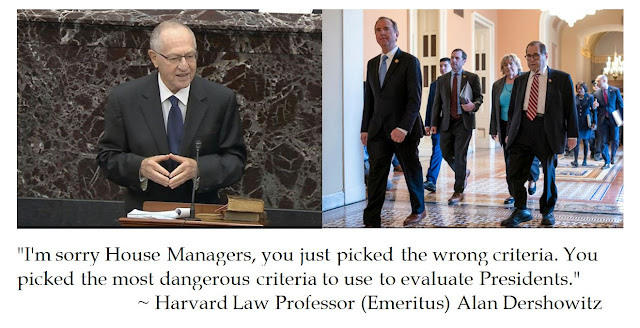 Posted by DC Calamity at 9:32 PM No comments:

Kenneth Starr on the Age of Impeachment 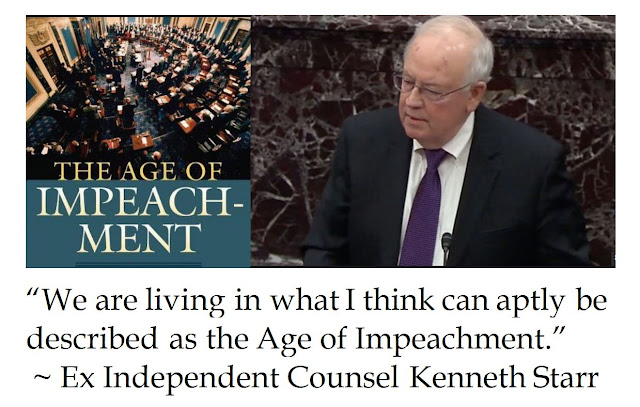 Posted by DC Calamity at 2:04 PM No comments: 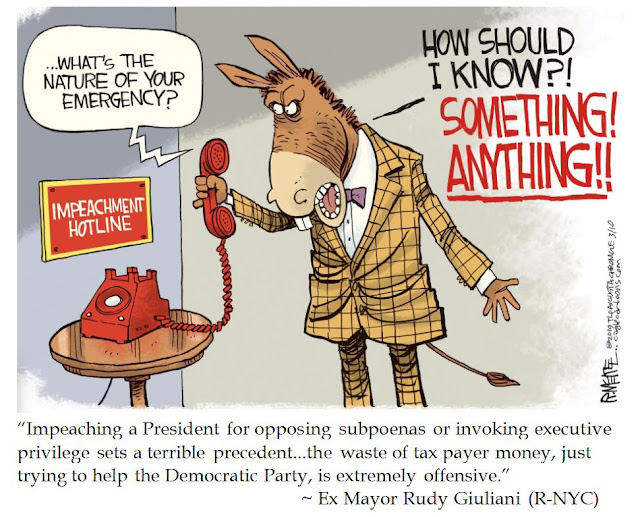 Posted by DC Calamity at 7:56 PM No comments: 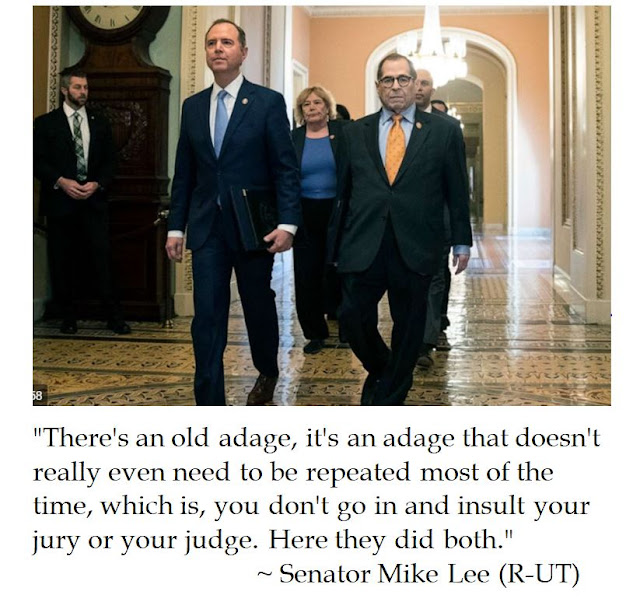 Posted by DC Calamity at 6:59 PM No comments: 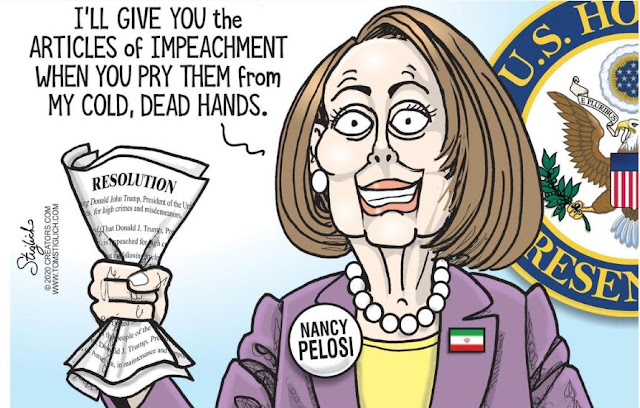 The Democrat led House of Representatives broke light speed records in order to vote to impeach President Donald Trump before Christmas.  Yet House Speaker Nancy Pelosi (D-CA12th) has refused to name impeachment managers and send the Impeachment Resolution to the Senate. Inquiring minds seek to know why.

As the final impeachment vote was taken on December 18th, 2019, perhaps Pelosi hoped that it would dominate holiday conversations while the House was adjourned. This tactic did not achieve the tsunami of support for removing President Trump.  In fact, polling show that Mr. Trump increased his favorability ratings.  After the vote was taken, it was difficult for the mainstream media to keep up the clamor about impeachment, especially as it is procedurally stalled.

Officially, Pelosi has proffered the rationale that she was withholding the Articles of Impeachment from a Senate to ensure a fair trial.  This is laughable considering how the Democrat majority ignored its own precedents on impeachment, ditched due process and achieved passage on a partisan nearly party line vote, with Democrat Presidential candidate Tulsi Gabbord (D-HI 2nd) voting present and three House Democrats voting “nay”, including Rep. Jeff Van Drew (R-NJ 2nd) who switched parties after the vote. 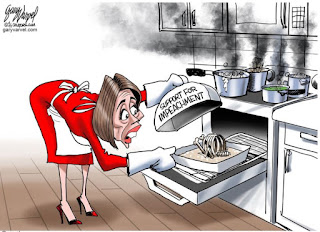 Pelosi reportedly got the idea to stall sending the Impeachment Resolution to the Senate based upon a suggestion from Nixon White House counsel and MSNBC contributor John Dean. This may be a ruse to allow the leftist firebrands of the party to claim victory for getting Mr. Trump impeached without going through the formality of a trial which is destined to fail as it can not achieve 67 votes.  Or it may have been a delay tactic to try to tack on more articles of impeachment to accompany the rather weak tea “Obstruction of Congress” and “Abuse of Power” allegations.  However, the taking down of Iranian terror leader Solemani did not lead to an undeclared war, so that charge was for naught. 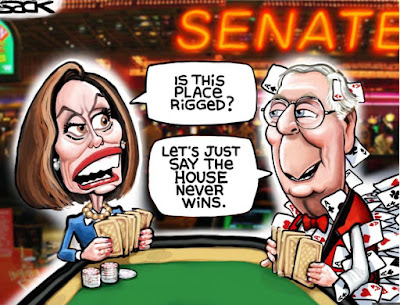 Surely the Speaker’s staff knows that having an outsider dictate how the Senate will take up an impeachment trial is unconstitutional. Article I Section 3 Clause 6 of the Constitution stipulates that:  “The Senate has to sole Power to try all Impeachments”.

Of course, constitutional considerations might not prevent some grandstanding in a power play over the Christmas holidays.  Senate Majority Leader Mitch McConnell had pencilled in a light legislative schedule for January 2020 in anticipation of an impeachment trial.  With Speaker Pelosi’s incalcitrance on sending the Senate the Articles of Impeachment, Leader McConnell proposed that the Senate might well take up the Impeachment even if the House fails to name Impeachment Managers, which would effectively dismiss the charges.  This move prompted Ms. Pelosi to indicate that she may take steps to move the resolution forward next week.

The reasons for holding the Articles of Impeachment from the Senate might been more political.  Former South Carolina Congressman Trey Gowdy suggested on Fox News that holding the Impeachment into the primary season might have caused tough votes for vulnerable Republican freshman Senators Martha Mc Sally (R-AZ) Corey Gardiner (R-CO) and Joni Ernst (R-IA).  That may be true but the politics may well have been more intermural.

Democrats are engaged in an uncertain Presidential primary process with no clear leader before the Iowa Caucuses and New Hampshire Primary.  Several leading candidates (and a few also rans still in the race) are still in the Senate.  Impeachment trial rules require all Senate participants to attend all of the trial in order to vote, which effectively would take Senators Sanders (Socialist/Democrat-VT), Warren (D-MA), Klobachar (D-MN) and Booker (D-NJ) off of the campaign trial or reveal them as slackers of the current elective office.  Had the Articles of Impeachment been immediately been sent to the Senate in December, it is likely that it would have impeded the January 14th debate, which is the last debate before the Iowa Caucuses.

Democrat Impeachment backers have argued for an expanded trial, which would include public witnesses which go beyond the nearly non-existent fact witnesses during the House Intelligence Committee Adam Schiff (D-CA 28th) Show and House Judiciary Chair Jerry Nadler (D-NY 10th) proceedings.  But if the witness list is opened up to President Trump’s defense, former Vice President and presidential candidate Joe Biden (D-DE) and his controversial son Hunter Biden may be compelled to testify, which could be messy and take a favorite of establishment Washington Democrats off the hustings and into the fire of tough invigilation.

Presuming that Pelosi is being procedurally political and tipping the scale to favor the only establishment candidate who consistently has a chance to beat President Trump,  it would be prudent for the Speaker to prompt a floor vote on Thursday January 16th and then adjourn for the Martin Luther King Holiday (oh, that’s right, District Work Sessions) and it would not be picked up until January 28th.  Even if House Judiciary Chair Nadler worked expeditiously in sending things to the Senate, it might not be received until the eve of the Iowa Caucus.

That sort of scheduling would require Senators to be present in Washington and not canvass in the final days of the New Hampshire primary, which would give Joe Biden and South Bend “Mayor Pete” Buttigieg a leg up on the competition during opening arguments which may last about a week.    The next week is the South Carolina primary where (if polling is accurate), Biden has a commanding lead and Mayor Pete is quite weak.  That might give Biden the mojo to become the front runner. 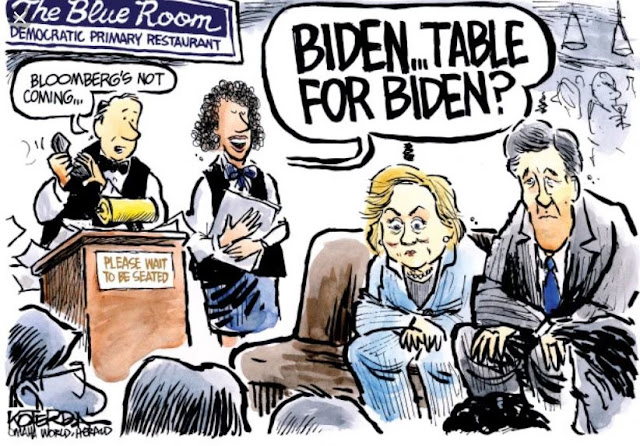 While it is highly unlikely that the Senate will muster the 2/3rds Super-majority to remove President Trump, the case may not be dismissed in a summary judgment like vote after opening argument.  In the even that Biden is requested to testify by the Senate, he may be able to stall until after Super Tuesday March 3rd, when he would either be the odds on favorite or an oddball also ran.

So Pelosi’s slow roll of advancing the Articles of Impeachment presumably are political but may well be partisan in inter-Democrat politics along with trying to take the Senate back into Democrat hands in the 117th Congress.
Posted by DC Calamity at 3:21 PM No comments: 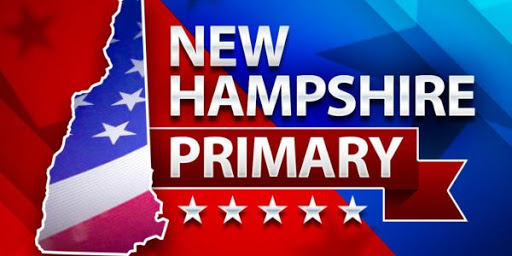